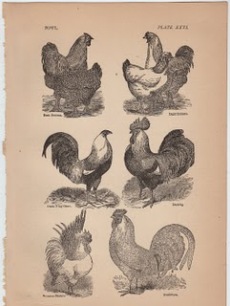 Une poulet.Uno pollo.A chicken. Some wise person described it as a blank canvas for cooks. The number of recipes ranging from weeknight suppers to the most formal of dinners supports that theory.

In a fair and perfect world, everyone could afford organic chickens. We are in process with that, and that day will come. I buy them when I can. I have an organic poultry farm in my area, and her eggs and chicken are fantastic.

Most of the time, I purchase chickens produced by Amish farmers. A bit more expensive than the supermarket brands, but less than the 100% organic free range ones, and yes, you do get better quality.

I do whole chickens either on our electric indoor rotisserie or en coquotte. For the rotisserie, I blend salt, pepper, oregano, garlic powder, and rosemary, then rub the mix under the skin. Do not ask me to tell you how to truss the bird. My trussing attempts look like a bondage session that went terribly wrong, but it’s enough to keep the wings and legs from flying around. Once the rotisserie is going, it takes about two to two and a half hours for the bird to be done.

En coquotte can be done with a slow cooker or in the oven at 400 for about two to two and a half hours. If you use a slow cooker, make a rack in the bottom with the carrots and leeks–cut both into batons. Season the chicken with salt and pepper as well as the desired herbs, and put it on top of the carrot-leek rack. Add some quartered redskins, then put it on high if you’ll be eating it in less than eight hours, or low for more than that. If you’re doing it in the oven, use a covered pot and the same veggies.

Leftovers can be used in a myriad of ways. The meat is also dog-safe, so you can use it as a treat or a base for Fido’s meals.