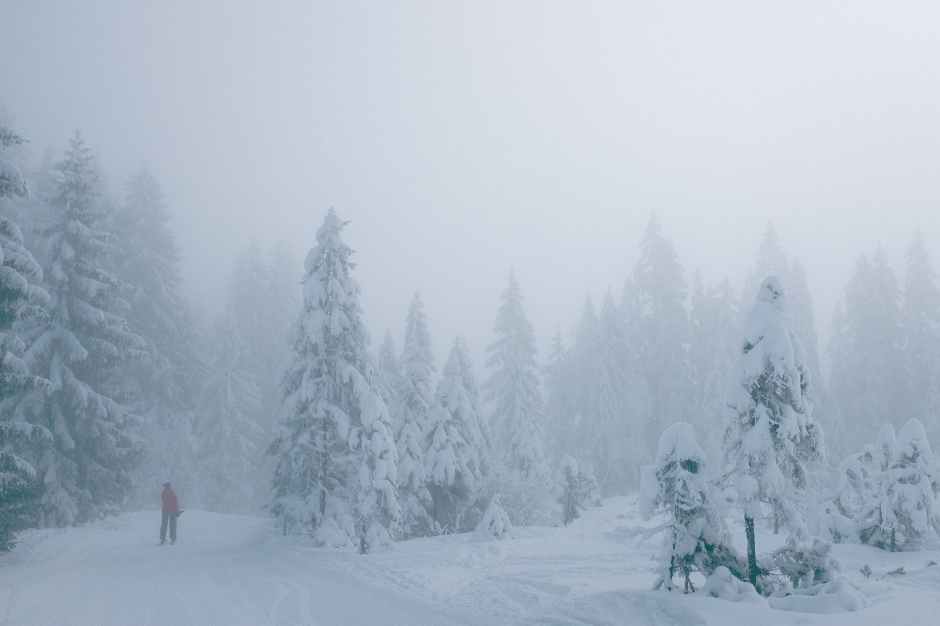 We didn’t get that much snow last night. We did, however, get enough wind to make it look as if a blizzard had landed and knock out the power for an hour. The roads are still slick and I’m sure the curve on the road that we take to the big park and day care has been blown in by the unrelenting west wind and snow traversing the open fields.

I decided not to take Oakley to day care. First and foremost, because of the weather and that the secondary roads we take are not that well tended. When I took Oakley out for his first potty run this morning, the majority of the drivers I saw on the main road were picking their way to their destinations with caution even though the roads looked plowed. It’s important that he sees his friends and teachers, yes, but I am not willing to have us risk hitting that one patch of black ice or snow and ending up in the middle of a field or a ditch.

The second reason was his hips. I’d taken him on Tuesday. I’d been home long enough to eat a bowl of soup for lunch when his teacher asked me to come pick him up. He was acting unhappy and having problems sitting and lying down. As if that wasn’t bad enough, he had diarrhea.

What really amped up the suck factor was that this was the first session after Ms. L. had closed down day care for two weeks because two of the teachers had shown COVID symptoms. They’re both OK, thank the Mystery. I had hoped that the afternoon would give Oakley some fun and frolic and me some space to vacuum and tidy a bit, but that was not to be.

So I arrived. Oakley did not look as happy as he was when I had dropped him off. Ms. L. had videoed him struggling to sit.

I watched the video. I looked at Oakley as he leaned into my shins, his way of hugging me. And in the bright light of the reception area, I saw a lot of white hairs blending into the chestnut ones above his eyebrows.

Just like me. It’s fine for me to get older, but Oakley, my companion, my guardian, my fur child? The bundle of legs and fur who’d put his head in the hollow of my neck and fallen into a snoring sleep on the way home from the adoption event where we’d found each other?

Oakley had been fine at home that morning, so it’s likely it was just one bad day caused by the weather. He’d torn it up with pups less than half his age at the last day care session. Well, some dogs age out of day care, and if it’s time to let the twice a week sessions go, it’s OK. No, it isn’t, but it is what it is as part of the aging process. Ms. L. reassured me that he will always be welcome on Ren Faire weekends or other occasions warranting a stay at sleepover camp.

OK, thank you. Go home. Give the homeopathic anti-inflammatory. Give the anti-diarrheal. No, baby. 1:30 is too early for dinner.

He went to his spot on the sofa and fell into a nap. I went on line and ordered more anti-inflammatory pills and another product by the same manufacturer specifically for arthritis. One of my friends had given it to her dogs with success, and I’m hoping for the same with Oakley.

If not, one of the vets at our clinic has experience in a couple of modalities that will help. We’ll figure out the best work arounds, like shorter but more frequent walks, herbs, cold laser treatments.

The arthritis pills will be here Monday, please Mystery.

Until then, short walks in the yard. Not a hard thing because of the wind chill. And anti-inflammatory pills every four hours.

And dream of warmer days ahead.O